I’ve got an example simple guide on how Staggered Orders can be done manually with a 1hr initial setup and 5 mins per day maintenance.

Volatility is not so good for “relative orders”. Small volatility up and down is good, but big volatility will wreck the strategy.

To do it manually, John Example needs to spend ~1 hour ONE TIME writing a simple excel spreadsheet, and then placing orders on the DEX following the spreadsheet instructions John will write for himself.

From then on, ONCE per day John will spend ~5 minutes replacing the orders that get filled.
So John does this every day long term and staggered orders has a high chance of making a profit. There is a risk, but it can be managed very sensibly.
Staggered Orders is best for use with bts that would otherwise just be sitting in an account doing nothing.
John starts small and practised for 2 weeks.

First thing to do is to decide how risky John wants it to be.
Let’s assume John want very low risk (because he should).
The risk is John setting his trading range too small.

Johns trading range is the range of prices between his lowest buy order, and his highest sell order.

If the price goes outside his range, he will have no funds to buy bts and no bts left to sell.
He’ll have to either wait for the price to come back, or settle for what he’s got.

John thinks about what to set as his Upper Limit first. John wants a maximum sell price of $400 per bts. If the price goes as high as $400, he’ll have sold all your bts on the way up - at an average price of ~$200.

Probably making a tidy profit.
Not so bad if he sells out at an average price of $200 is it?

John has to be comfortable with the possibility that he’ll have sold all his bts if the price reaches his Upper Limit.
So if johns a long term bull, and he wants to be a big risk taker - would he be happy if he sold out of all bts at $0.10 because he set a tiny range to be greedy and try and make more profit? No.

So let’s say John has an upper limit of $400.
Then he has to set his Lower Limit.
This is the price that he will go “all in” on bts. He will have used up all of his bitCNY and will he all in bts at this price. John never wants to go all in, as he always wants to have bitCNY to buy more bts if the price drops. Because if he buys bts when it drops, it means he has more bts to sell when it rises. That’s his profit.
John wants a stratgey that accumulates bts even if the price stays relatively stable. That’s why he wants Staggered Orders.

So John opens an excel spreadsheet and writes his upper limit in cell B1 : He then decides he wants an “increment” of 5% .

Every time the price moves + or - 5% John wants to take a profit. John then drags this cell formula down, until the last cell shows 0.005 (his Lower Limit) :

Lots of orders - but John knows he only has to do it once.

To keep it simple, and to make the same amount of profit every trade.

John splits up his bts into equal parts.
His excel spreadsheet tells them there are 232 orders in his strategy.
One of those orders will ALWAYS be the market price. So that order is left open.
So 232-1= 231 orders John will have on the orderbook at all times.

So he needs to split his bts pile up into 231 parts. John now needs to know how many $ he would need to buy 4.329 bts at every price on his staggered order excel spreadsheet instructions. 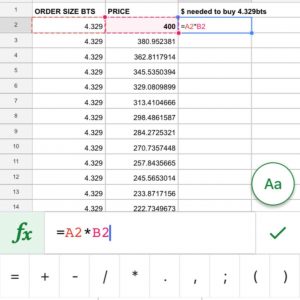 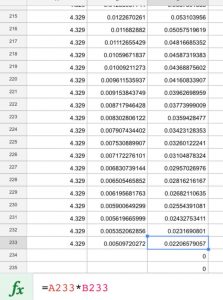 So he needs to work out how much of his bts to sell now, so that he has enough bitUSD to place all his buy orders between the current market price and his Lower Limit. 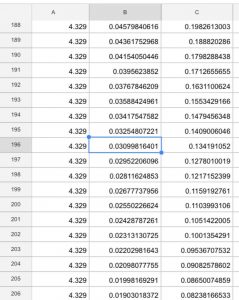 John then counts the number of orders below (but not including) this cell.

He finds there are currently 37 cells below. There will be “buy” orders.

Then he counts that there are 194 orders above (but not including) this cell.
These are “sell” orders.

John then starts placing his orders on the DEX.
He goes to the bitUSD:bts market and works out where to place his first order.

He reads his excel spreadsheet instructions.

He looks for the cell just below the “market price” order he put his finger on earlier.

John then moves down 1 cell and sees that the buy order he needs to place.

John continues working down his excel instructions until he’s placed an order at every price all the way down until $0.005 . John looks at his instructions and starts by looking at the row of cells just above the market price he highlighted in red.Then John moves on and places the second “sell” order.John sees that the first “sell” order he needs to place is to sell 4.329bts at a price of $0.0325.
He sees that IF someone later takes his order they will have to pay him $0.1409 bts.

John does this until he’s placed all of his sell orders.

“PHEW!” Says John.
“I’m glad I only have to do this ONE TIME, and gosh darn it isn’t it worth it. I’ll be glad in a years time I kept up with it.

I just love proving liquidity to the DEX I love, helping it grow, helping keep the price, and providing utility to all of bitshares’ customers.
If make a profit that would just be a big bonus”.

John feels great about placing all those orders.

He goes and has a great day living his meat space life.

In 24hrs he comes back to sit at his computer and looks at his DEX orderbook
And opens up his excel instructions.

He sees that the market price has moved down.

John doesn’t care.
He loves volatility now, and he can add that see that 2 of his “buy” orders have been filled.

He views his excel instructions, and looks at the row just above the current market price (highlighted in red). John now has an updated orderbook, and he can go and live his life for another 24 hrs.

The next day John sees that the price has pumped overnight and moved up! John sees that some of his “sell” orders have been filled.
He’s sold several lots of 4.329bts .
And has a chunk of bitUSD to show for it.

John knows he now has to use this bitUSD to place “buy” orders .
To buy back the bts he sold, and leaving him a bit of bitUSD as his profit.

Now he has an updated orderbook again.

And can go out for 24hrs and then come back to update it again.

John maintains his orderbook every day, but when he occasionally misses a day or two, it doesn’t matter.

He updates it later. He just knows that he’ll have made a bit less profit than he otherwise would have.

PS : Join, and you can come back to the instructions when you’re ready to go. I’ve posted these static instructions to this channel: https://t.me/StaggeredOrders